This guide explains how to perform “Blue/Green” deployments using Release and Deploy.

Blue-green deployment is a pattern in which identical production environments known as Blue and Green are maintained, one of which is live at all times. If the Blue is the live environment, applications or features are deployed to and tested on the non-live Green environment before user traffic is diverted to it.

If it is necessary to roll back the release in the Green environment, you can route user traffic back to the Blue environment.

Defining the Blue/Green pattern in Release

The first step is to create a sketch of the process. This gives you a high-level overview of the Blue/Green deployment pattern.

This Release template shows the basic steps. You can create it by adding manual tasks as placeholders. Deploy will be used this example, so Deploy stub tasks are added.

There are four phases:

This is a preparation phase to make sure that the software is deployed to the correct environment.

You are ready to deploy the new application version to the environment that is not in use.

After the deployment is running and is fully tested, you can make the switch.

Set up Deploy, prepare the environments, and link everything together in Release using variables to communicate between tasks.

In Deploy, you will have two nearly identical environments: ‘Blue’ and ‘Green’. 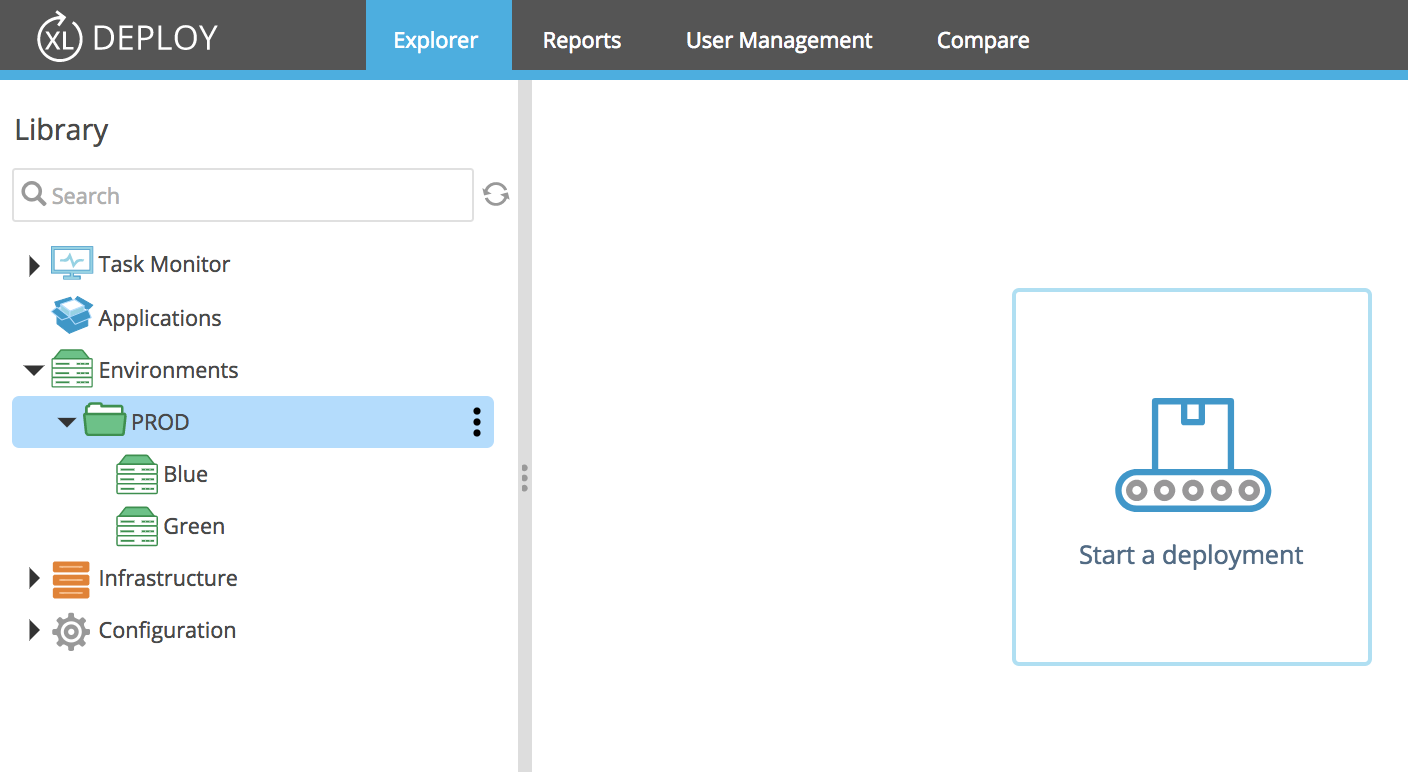 In this example, they are located in the ‘PROD’ folder.

In Release, add an Deploy Server item under Shared Configuration and point it to your Deploy installation.

Define the following variables in Release that maintain the state of the Blue/Green process. 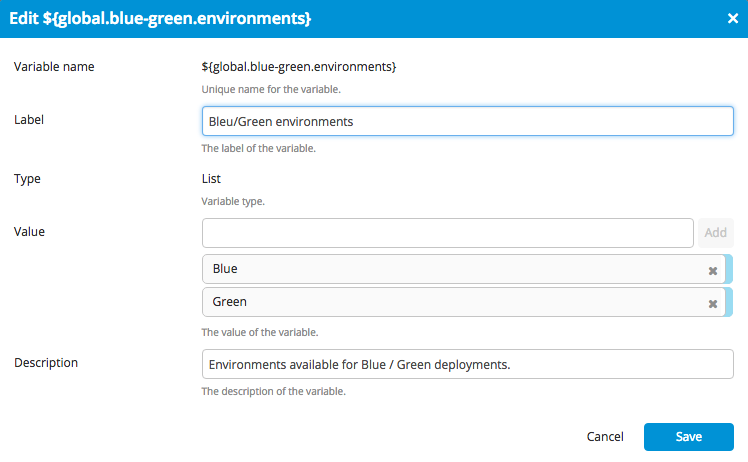 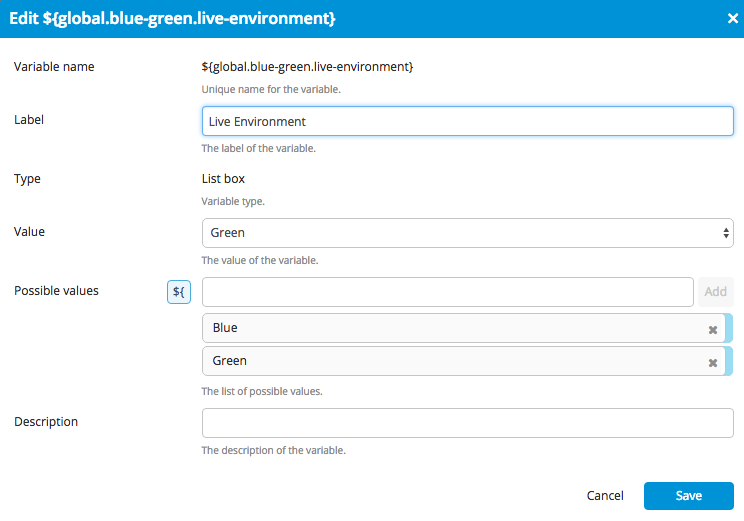 In the same fashion, we maintain the version of the application in the global variable ${global.blue-green.live-version}. 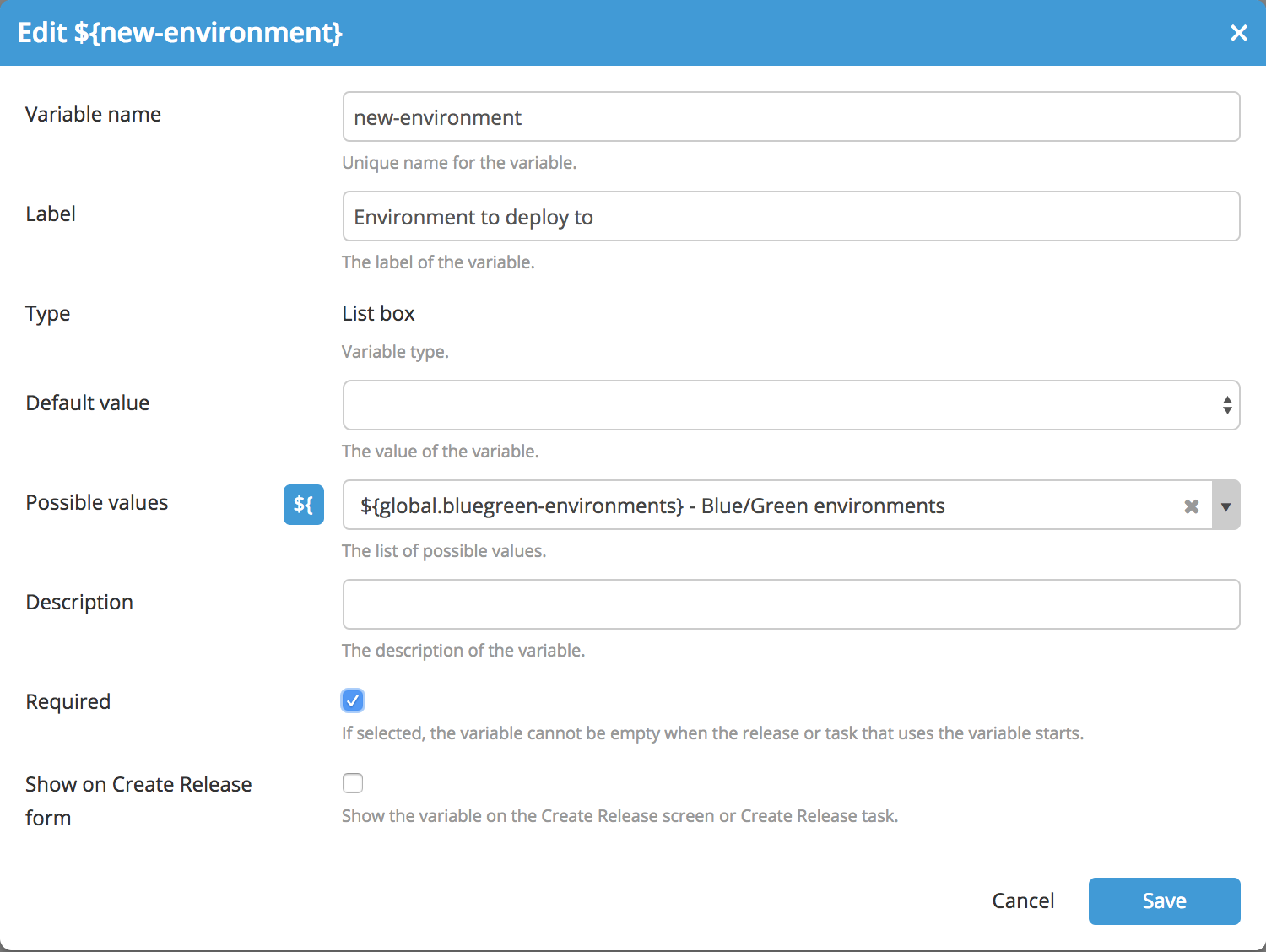 Use these variables in the release flow. Here are some examples of tasks using the variable.

In the What is currently live? task, use a simple script to determine the new environment:

The User Input task Confirm new environment confirms the environments with the release manager. The Release manager can override this choice by selecting another value from the drop down. You can use the variables in the description to render a helpful message. 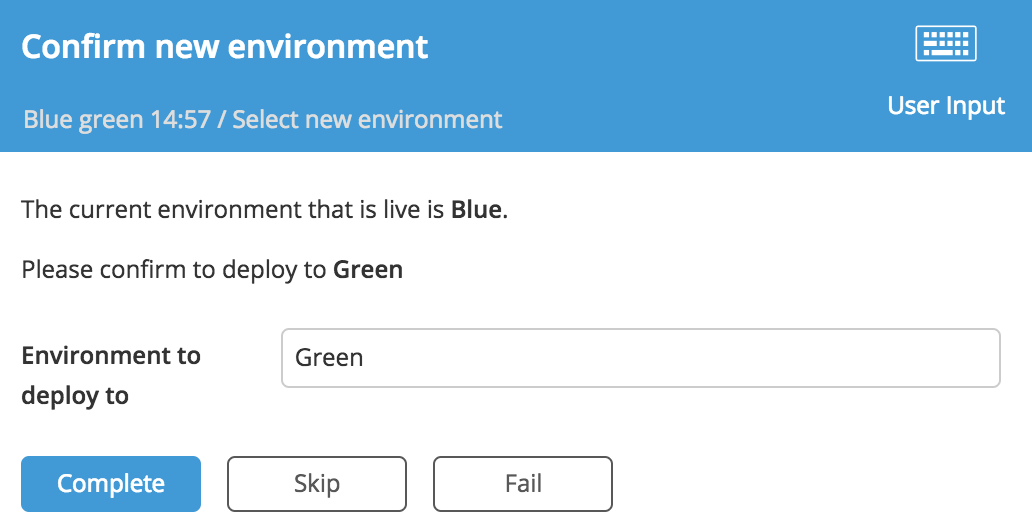 The Deploy task takes the variable to determine which environment to deploy to. 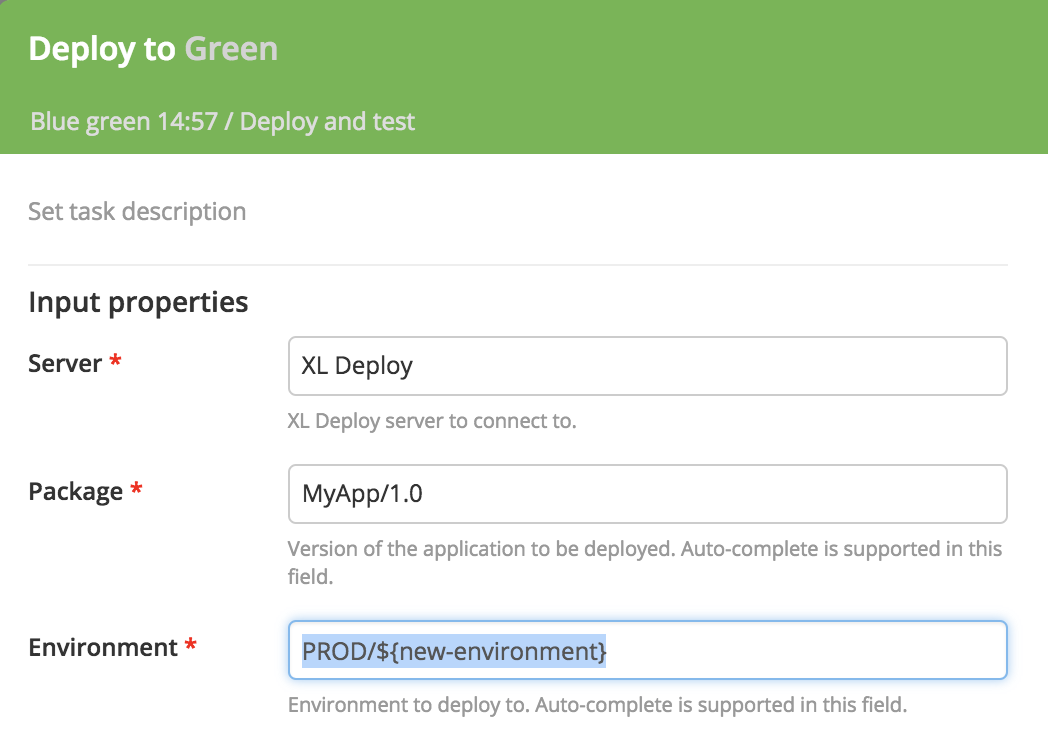 When the deployment was successful, the registry of what is running is updated by setting the global variables in a the Script task Update registry with live environment.

Users and Teams in Release

To run the scripts with proper permissions, make sure the Run automated tasks as user is set in the template properties page. This user needs the Edit global variables global permission.

You should create teams and assign them to the appropriate tasks. For example, you can assign each task to the Release admin team. This will make it easier to run the examples. The easiest way to do this is to do a bulk edit from the table view: 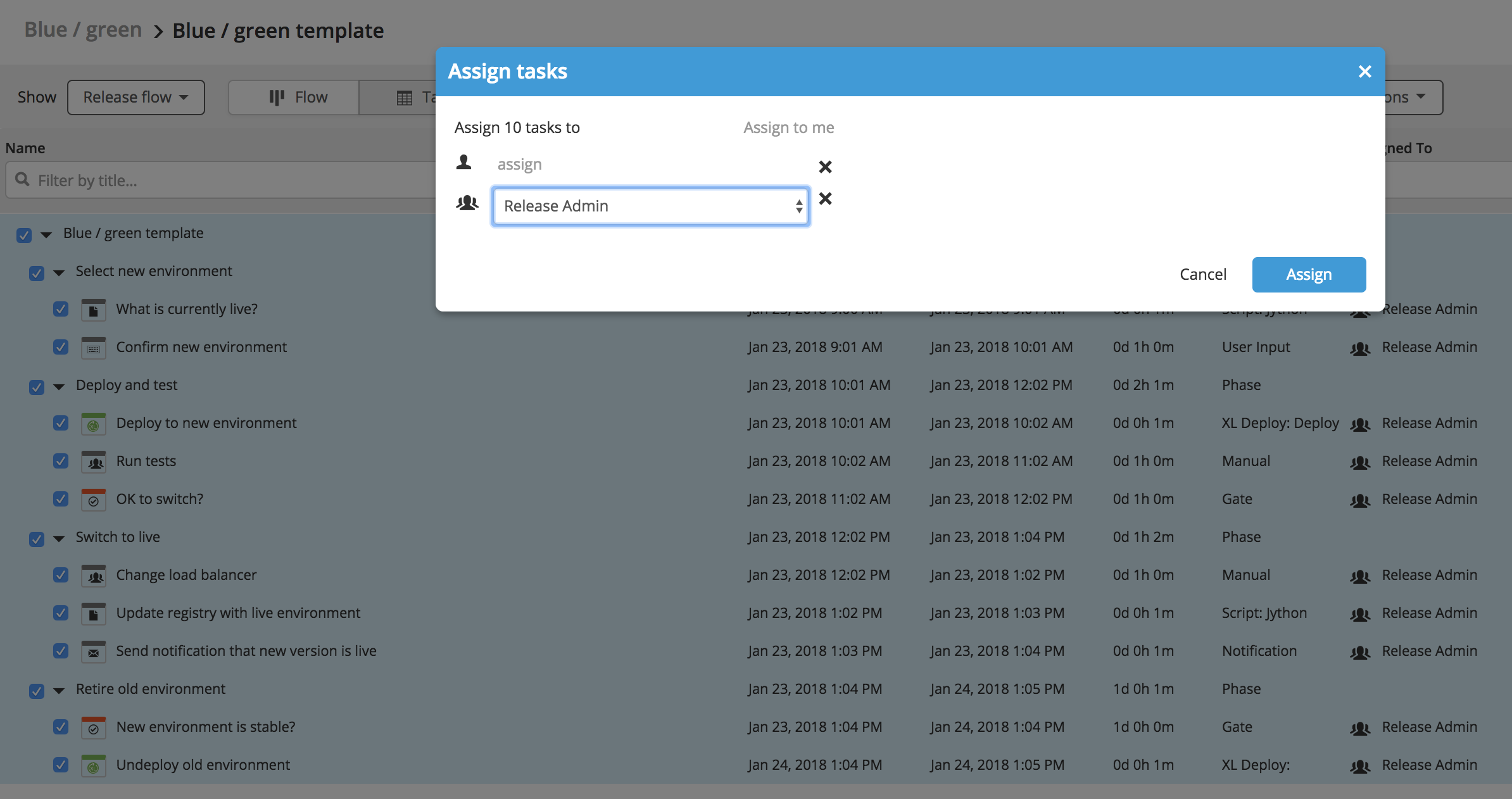 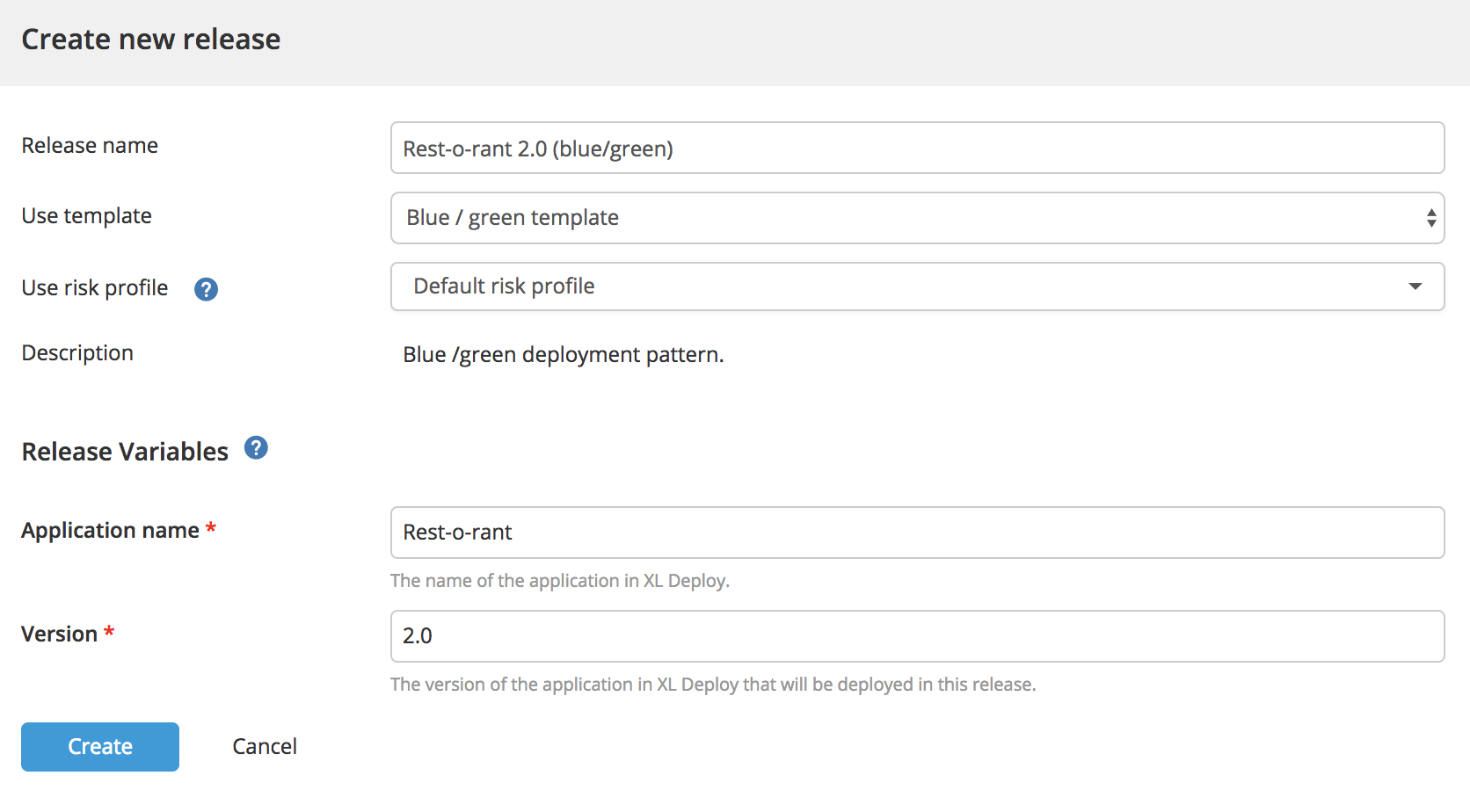 When the release reaches the task, enter the environment to use:

The correct deployment will be triggered in Deploy.