Suppose you are doing a deployment where one of the deployables is a file.Folder or any type derived from this. As part of the deployment, placeholders will be replaced in each of the files contained in the folder, and then the files are transferred to a temporary directory on the target host before moving them to their final deployment destination.

The legacy way of doing this is by copying each of the files one-by-one. While this works well, it can be slow when there are many files to copy since each file has some connection overhead. As of 9.7, XL Deploy provides additional copy strategies to speed up this process.

These are the available strategies:

In order to be backwards compatible, XL Deploy will default to the legacy OneByOne strategy.

This behaviour can however be overridden on a per-host basis. Any overthere.Host CI has a new property called Copy Strategy inside a new Zip section, that allows you to select which strategy is to be used for deploying file.Folder CIs to this host. Note that this is an optional value.

As of Deploy 9.8, a new parameter is added to the retry logic: xl.task.step.on-copy-artifact.enable-retry. It enables the file copy process to retry establishing connection so that any hardware issues such as system non-responsive, network disconnection are handled automatically.

The default value of the token is false. When set to true, the Deploy step retries establishing connection automatically, while abiding by the values set in the xl.task.step.max-retry-number and xl.task.step.retry-delay parameters.

XL Deploy can detect which unzip/untar capabilities the target host has. This behaviour is turned off by default since this incurs a small detection overhead, but it can be enabled by setting the properties in deploy-task.yaml as follows: 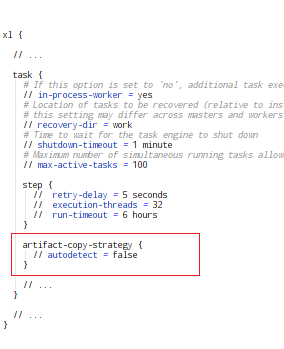 When set to true, copy strategies are tried one-by-one, until one succeeds. For Windows target hosts, the try order is: ZipWindows, Tar, ZipUnix, and OneByOne. For Unix hosts, the try order is: Tar, ZipUnix, ZipWindows, and OneByOne. A test zip or tar archive will be copied to a temporary directory on the target host and the respective unzip/untar commands are tried. If these fail, the next strategy is tried; if it succeeds then the current strategy under test is picked for the deployment of the file.Folder.

To have a better look under the hood, configure conf/logback.xml to enable DEBUG logging on the com.xebialabs.deployit.io namespace