Placeholders are configurable entries in your application that will be set to an actual value at deployment time. This allows the deployment package to be environment-independent and reusable. At deployment time, you can provide values for placeholders manually or they can be resolved from dictionaries that are assigned to the target environment.

When you update an application, Deploy will resolve the values for placeholders again from the dictionary. For more information, see Resolving properties during application updates.

Important: Placeholders are designed to be used for small pieces of data, such as a user name or file path. The maximum string length allowed for placeholder values is 255 characters.

File placeholders are used in artifacts in a deployment package. Deploy scans packages that it imports for files and searches them files for file placeholders. It determines which files need to be scanned based on their extension. The following items are scanned:

Before a deployment can be performed, a value must be specified for all file placeholders in the deployment.

Important: In Deploy, placeholders are scanned only when the CI is created. If a file which is pointed to an external file is going to be modified, it will not to be rescanned for new placeholders.

If you want Deploy to scan archive files with custom extensions as placeholders (such as AAR files which are used as JAR files), you must add a new XL_DEPLOY_SERVER_HOME/conf/reference.conf file with following settings:

The angle brackets (< and >) are required for these special values.

Note: A file placeholder that contains other placeholders does not support the special <empty> value.

How does placeholder scanning and replacement work

From Deploy v.9.0 onwards, the placeholder scanning and replacement implementation switched from a filesystem-based approach to a streaming approach. This uses the Apache Commons Compress library. The general algorithm is:

The new implementation is also much stricter than the previous method. This could result in errors to files that were formerly correctly scanned, causing deployments to fail. Frequently, errors of this sort are due to the archive structure. For more assistance with placeholder issues, see Debugging placeholder scanning. Note that if the archive cannot determine the text file encoding, it will fall back to a JVM character set, usually UTF-8.

If you do not need to check the placeholders for integrity and want to speed up the time to import files, you can also disable placeholder scanning altogether.

The list of file extensions that Deploy recognizes is based on the artifact’s configuration item (CI) type. This list is defined by the CI type’s textFileNamesRegex property in the XL_DEPLOY_SERVER_HOME/conf/deployit-defaults.properties file.

If you want Deploy to scan files with extensions that are not in the list, you can change the textFileNamesRegex property for the files’ CI type.

For example, this is the regular expression that Deploy uses to identify file.File artifacts that should be scanned for placeholders:

To change this, remove the number sign (#) at the start of the line and modify the regular expression as needed. For example, to add the test file extension:

After changing deployit-defaults.properties, you must restart Deploy for the changes to take effect.

Placeholders are only scanned while importing a package into Deploy and if DAR does not specify the scanned placeholders as true.

To Rescan Placeholder of deployed or just saved file, select the respective file and do the following steps: 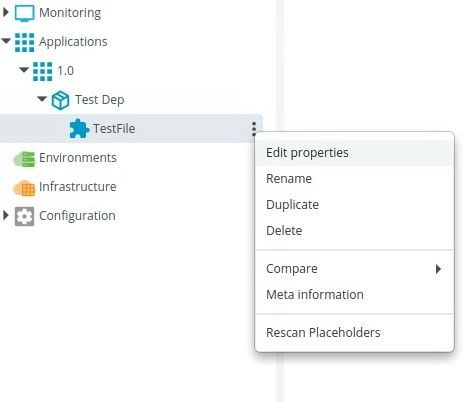 When you import of a package, Deploy applies placeholder scanning and checksum calculation to all of the artifacts in the package. The CI tools can pre-process the artifacts in the deployment archive and perform the placeholder scanning and the checksum calculation. With this change, the Deploy server is no longer required to perform these actions on the deployment archive.

Scanning for all placeholders in artifacts is provisioned to be performed by the Deploy Jenkins plugin at the time of packaging the DAR file. An artifact in a deployable must have the scanPlaceholders property set as true to be scanned.

For example, when the Deploy Jenkins plugin creates the artifacts, it sets the scanPlaceholders to true for the artifact before packaging the DAR. (Which means artifacts to be scanned for placeholders while importing).

After a successful scanning, the deployment manifest contains the scanned placeholders for the corresponding artifact and sets the preScannedPlaceholders property to false. (Which means the artifacts is already scanned for the placeholder).

When the package is imported in Deploy, the placeholders are scanned.

If you do not want to use the Deploy Jenkins plugin to scan placeholders and you want to scan the packages while importing, you can modify the deployment manifest and change the preScannedPlaceholders to false with scanPlaceholders set as true.

scanPlaceholders: Scan artifacts for placeholders during the execution of a deployment.

preScannedPlaceholders: Allowing one to preset the placeholder values in the manifest.xml file, to lower processing time in deployment. This alleviates scanning the entire package for placeholders, and also allows one to select only those placeholders they want to replace and not all.

To debug placeholder scanning, edit the XL_DEPLOY_SERVER_HOME/conf/logback.xml file and add the following line:

While working on applications with the placeholders in Deploy, you will be seeing debug statements in the deployit.log file as follows:

The zipinfo tool can also be useful when working with archive structures.