This guide explains how to perform the Canary Release deployment pattern using Release and Deploy.

The Canary Release deployment pattern is a pattern where a small subset on your production environment is used to test out new features. The environment is split into a Canary part and a Main part. The canary part is typically small and allows for fast deployments. A load balancer is used to direct traffic to all parts of the application, deciding which users go to the new version in the Canary section and which users remain on the stable Main section.

If the changes are not successful, only the smaller environment needs to be rolled back.

This pattern, like most deployment patterns, requires that at least two versions of the software are active in the same environment at the same time. This adds requirements to the architecture of the software, for example: the two versions must be able to connect to the same database and the database upgrades must be managed more carefully. This is outside the scope of this article.

The first step is to create a sketch of the process. This gives you a high-level overview of the Canary deployment pattern. 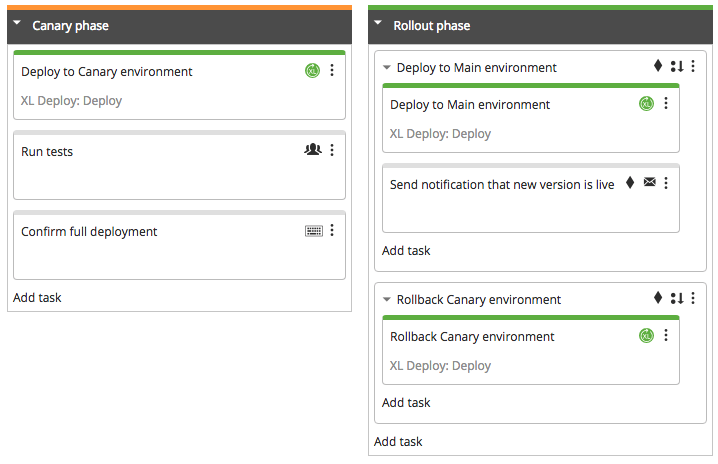 This Release template shows the basic steps. You can create it by adding manual tasks as placeholders. Deploy will be used in this example, so Deploy deployment tasks are added.

This high level sketch is the starting point of your Canary Release process. The primary purpose is to be detailed description of the Canary Release deployment pattern, but it can also be used as a workflow model.

There are two phases:

The new version is deployed to the Canary section of the environment and tests are performed. At the end of the test, confirmation is given to roll out the change to the Main environment. If the tests fail, the original version can berolled back to the Canary environment. 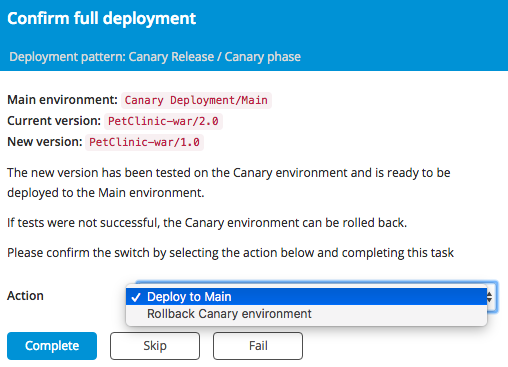 Each alternative is a Sequential Group with a precondition (indicated by the diamond). The precondition selects which action is taken. 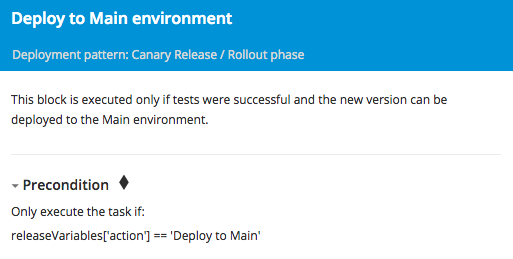 In Deploy, you will have two environments: ‘Canary’ and ‘Main’. In this example, they are located in the ‘Canary Deployment’ folder. 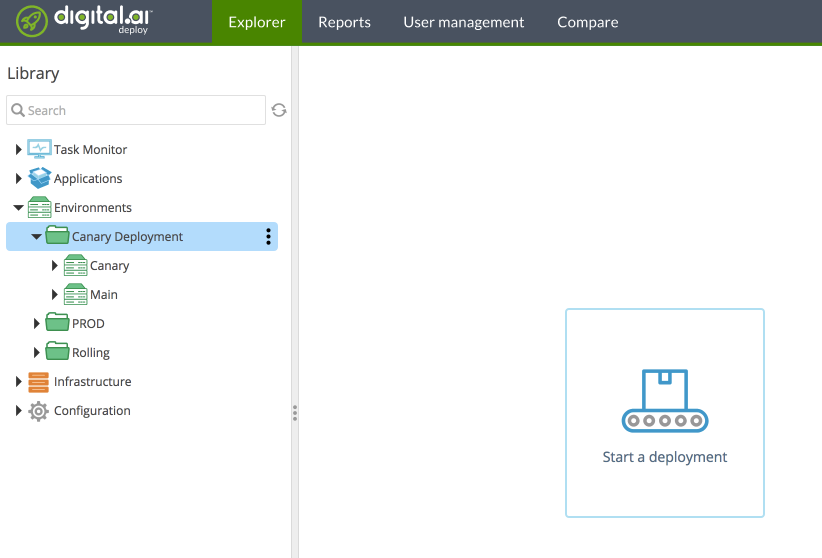 In Release, add an Deploy Server item under Shared Configuration and point it to your Deploy installation. When you have done this, configure the Deploy tasks in the Canary deployment template to use this server.

The application should be reachable at all times. To achieve this using a Canary deployment pattern, a load balancer needs to be added that redirects traffic to the active environments and stops forwarding traffic when a node is down during the application upgrade.

Configuring the load balancer in Deploy is outside the scope of this article, please refer to Perform Rolling Update Deployments for more information on how to do this. The technique describe in this article is also applicable to the Canary deployment pattern.

You can now to run the release. Create the release and fill in the values for the application name, versions and environments. Note that these value should match the corresponding items in Deploy. 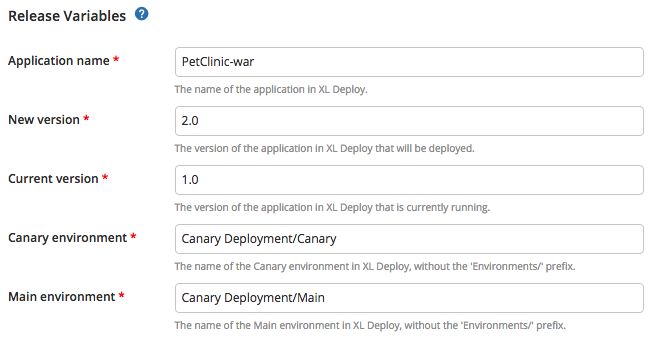 These variables are used in the Deploy tasks to inform Deploy which version to deploy to where.

Start the release and the correct deployments will be triggered in Deploy.