During a complete life cycle, a release passes through multiple stages.

Stage 1: Define a blueprint of a release as a template. Stage 2: Create a planned release from the template. This release is a copy of the template, but it has not started yet. Stage 3: Start the release. The release state changes to active and the phases and tasks are executed. Stage 4: All of the tasks are finished and the release is complete.

As the release moves through its stages, it can be in several possible states as shown in the following diagram. 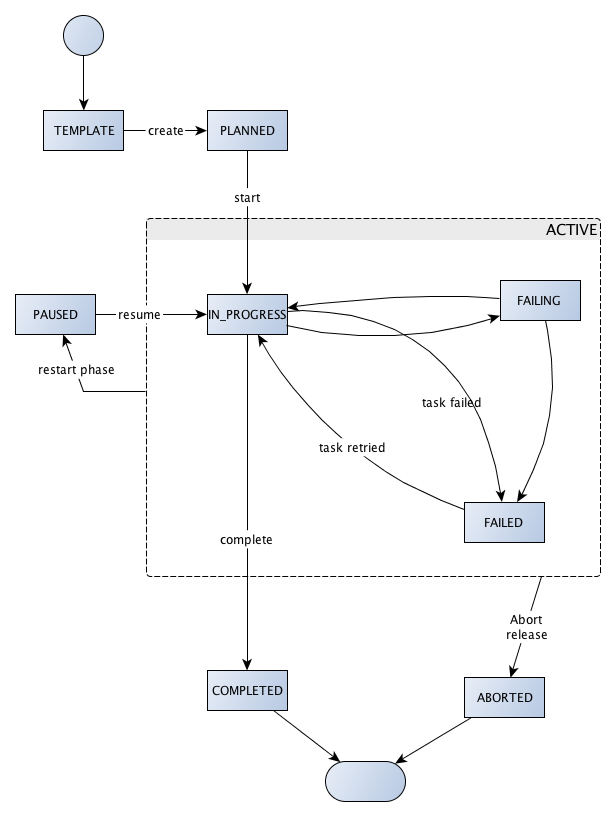 All releases are derived from templates. You can create a release from an empty template and the first state of a release is template.

When you create a release from a template, a copy is made from the template and the release state is set to planned.

In progress, failed, and failing states

When the release starts, the release state changes to in progress and the phases and tasks start. Notifications are sent to the task owners to complete their assigned tasks.

In a running release, Release starts the planned tasks in top to bottom and left to right order. Release executes the tasks if they are automated or sends a notification to the assigned users to complete them if they are not automated.

One or more tasks can be active at any moment in a release. Users can find the tasks assigned to them in their task overview. Users are required to mark tasks as complete in Release when done.

If an active task fails, the release is paused. The release owner must assign the task to another user or to skip the task.

Restarting a phase can cause a delay of the release. In this situation, the copied tasks can have incorrect start and due dates or can be assigned to the wrong users. The release owner must configure the tasks correctly before continuing the release.