Get started with tasks

Deploy periodically stores a snapshot of the tasks in the system so that it can recover tasks if the server is stopped abruptly. Deploy will reload the tasks from the recovery file when it restarts. The tasks, deployed item configurations, and generated steps will all be recovered. Tasks that were failing, stopping, or aborting in Deploy when the server stopped are put in failed state so you can decide whether to rerun or cancel them. Only tasks that have been pending, scheduled, or executing will be recovered.

Deploy can schedule a task for execution at a specified later moment in time. All task types can be scheduled, including deployment tasks, control tasks and discovery tasks.

Schedule a task to any given date and time in the future. To prevent mistakes, you cannot schedule tasks on dates that have passed.

When a task is scheduled, the task is created and the status is set to scheduled. It will automatically start executing when the scheduled time has passed. If there is no executor available, the task will be queued.

For more information, see Schedule or reschedule a task and Schedule a deployment.

When Deploy is restarted through a manual stop or a forced shutdown, it will automatically reschedule all scheduled tasks that are not executed yet. If the task was scheduled for execution during the downtime, it will start immediately when the server restarts.

Scheduled tasks are not automatically archived after they have been executed, you must do this manually after the execution has finished.

In Deploy, the task can be archived only after the completion of execution. By default, Deploy will reuse its live database for the archived tasks. Archiving the task can only be done manually as this is required to review whether a rollback is required.

The successfully deployed and archived tasks can be viewed in the Dashboard under the Reports tab on the main menu.

When a scheduled task encounters a failure during execution, the task will be left in a failed state. You must manually correct the problem before the task can continue, or reschedule it.

You can start a scheduled task immediately, if required. The task is then no longer scheduled, and will start executing directly.

You can reschedule a task to any other moment in the future.

A scheduled task can be cancelled. It will then be removed from the system, and the status will be stored in the task history. You can force cancel a task to delete all the task related files and skip all the failed steps.

When using the force cancel option to cancel a task, the task data is removed from the database. If the workdir on one of the nodes in the active/hot-standby or master/worker setup still contains the task, Deploy displays the task as unknown when it is restored from the workdir. The task exists in the task engine, but cannot be managed through the Deploy Monitoring view.

Deploy fetches the tasks from all the workers and restores the information for the tasks back to the active repository (database). Resolving the unknown tasks on workers is done based on the missing information in the database for such tasks that exist in the local task repository.

Note: Only admin can clear the unknown/corrupted task by using the force cancel option in the deployment task.

In Deploy, a task can go through the following states: 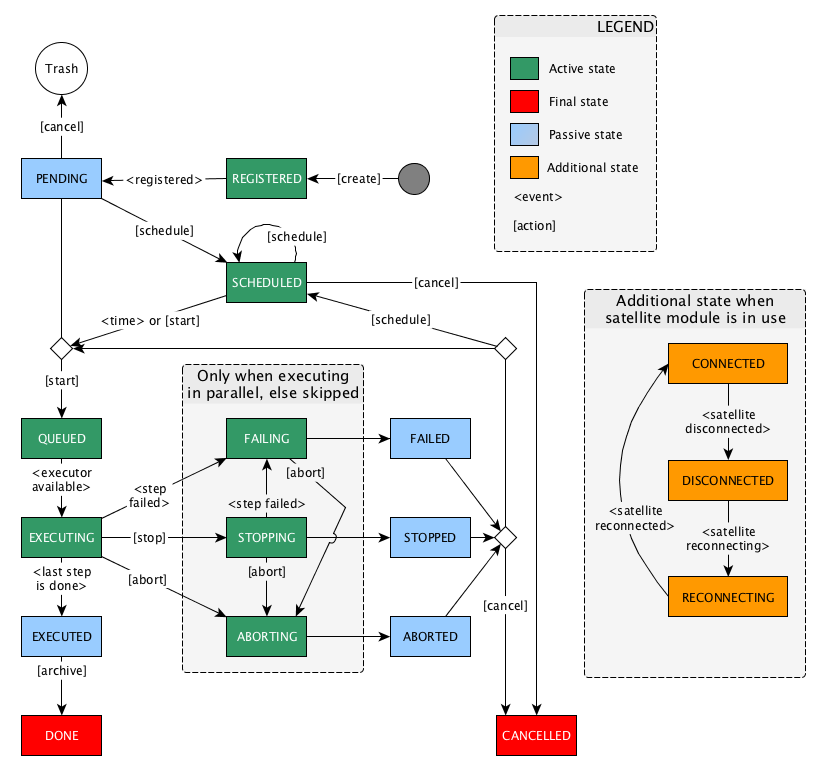 You can interact with tasks as follows: